Are you finding that it’s really hard for you to keep weight off? Have you been frustrated that your best efforts seem to be thwarted when it comes to weight loss?If so, check out these 7 Sneaky Reasons you’re gaining weight. Some of these will be a surprise: 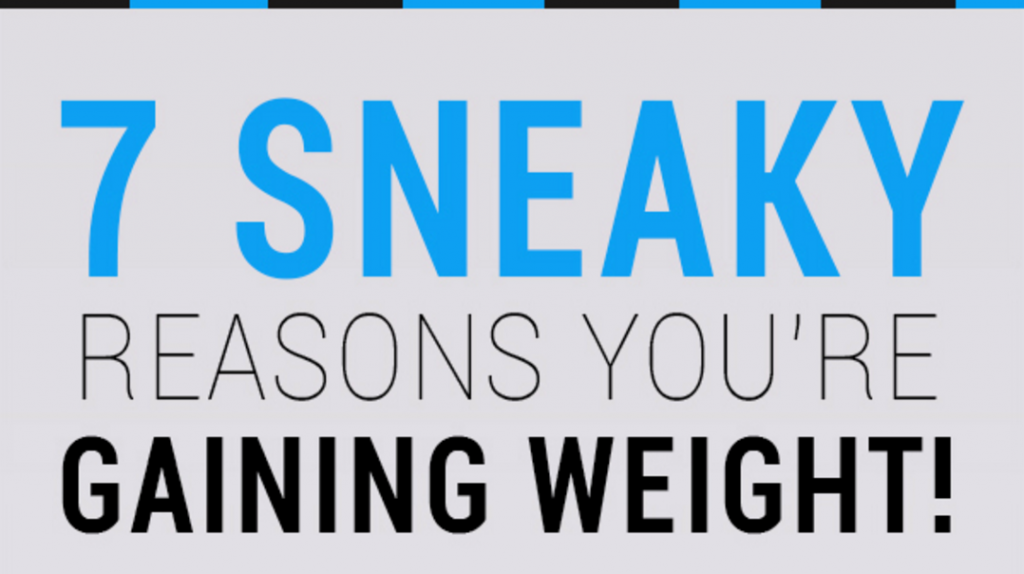 #1: Cigarettes! You may have thought that cigarettes keep you thin. This has been the belief for a long time, but recent research has proved this wrong! Smoking actually causes your body to become insulin resistant, leading to weight gain and difficulty losing weight.  And, the same effects were found in people inhaling second hand smoke. So do yourself and your loved ones a favor and ditch the smokes!#2: Working Nights. Desperate times call for desperate measures, and for some, this measure is working the graveyard shift. While it may provide a boost to your pay (third-shift workers often get paid more than others), it wreaks havoc on your body. From messing up your sleep cycles to putting you in a position that requires less movement to eating more out of boredom, working through the night is full of weight-gaining risks.

#3: Too Many Food Choices. This is a first world problem. In our society, we are often faced with buffet-style meals, where we can pick and choose from many foods. When this happens, it’s very easy to simply put too much on a plate.

The solution? Choose a small portion of lean meat and two veggie sides.

#4: Overestimating Your Workouts Intensity. It’s almost impossible to out work a bad diet. Don’t assume that your super sweaty workout burned somany calories that you can pig out later. This isn’t true. For example, if you run for an hour you can burn 557 calories. The problem is if you have a #1 combo from McDonalds later, you will chow down 1200 in that one meal! So keep your workouts intense, and your eating clean if you want to drop pounds.

#5: Being sedentary. Sitting is the new smoking. In our society, we sit too much, for too long. Apple did an interesting thing with their new Apple Watch. It reminds you every hour to stand up for one minute. Now, that may not seem like much, but it IS surprising how quickly an hour goes by, then the next hour, and so on. So you don’t need an Apple Watch to do this, just set an alarm on your phone every 60 minutes of work, and get up and walk around and stretch out at least that often. It makes a surprising difference.

#6: High Calorie Snacks. Almost all of us need a snack in between meals. And this is healthy. But if you are hungry when you snack, it’s easy to eat as many calories as you would in a regular meal, which defeats the purpose. Here’s a few tips to help you avoid that:
-Keep nuts handy, and don’t eat them from the bag! Grab a small handful. For example, you may be surprised how well just 4-5 Brasil nuts will knockdown your hunger pains
-A single apple will fill you up until your next meal, without adding a ton of calories
-Drink water as your first snack option. Often, a big drink of water will take the edge off your hunger.

#7: Drinking Beer Before Your Meal. Beer itself has a ton of calories. But worse, research shows that people who drink beer before eating eat more food than they would have… a double whammy. Beer calories, plus more calories from the food. So next time you’re waiting at the restaurant for a table, have some lemon water!