Remember taking “Metabolism 101” in school? Nope, me neither. It’s a word every one of us knows, but it’s one of the least understood health concepts out there. And very few people really dive in to figure out how it works and what they can do to improve their own metabolism.

So today our goal is to at least myth-bust the top five myths about metabolism, in order to understand it better.

Myth 1: Metabolism only works during the day. 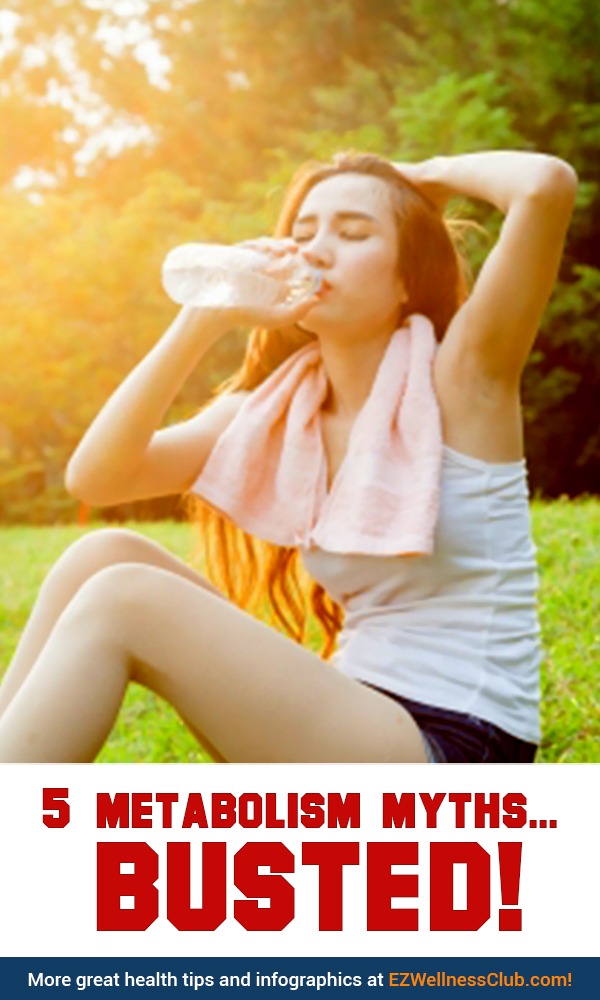 Not true! Recent research indicates that, contrary to popular belief, your metabolism only works slightly less hard during the night! And it makes sense. While you are sleeping countless health processes are happening that can only be done while you sleep.

So if you think you can cheat at lunch time with a burger and fries, while being more careful what you eat for dinner and before bed will keep your metabolism down… isn’t true.  You have to eat well all day long!

Myth 2: Your metabolism is out of your control.

Because some peoples metabolism seems so much better might make you think there’s nothing you can do about yours. Instead of getting angry at that skinny person who can eat whatever they want and stay thin, work on your own metabolism… you CAN improve it! Here’s some known metabolism boosters:

-Getting at least 7-8 hours sleep

-Eating enough protein. Very few people do. Keep track of your protein, fat and carb intake just for 3 days every now and then using an app like My Fitness Pal, and you will be surprised at the numbers… in almost every case people find they get too many carbs, not enough protein, too many unhealthy fats, and not enough healthy ones.

Au contraire! As a matter of fact, larger people sometimes have a faster metabolism, because there is more to metabolize! So don’t assume that if you have a few pounds to lose that your metabolism is sluggish. If you can shed those pounds you will probably find your metabolism is just fine.

One key is in the type of weight people have. Focus on increasing muscle through resistance training. Increased muscle equals a better metabolism.

Myth 4: Your metabolism plummets as you age.

The fact is the metabolism doesn’t drop as much as people think it does. And it’s not so much due to age, as due to loss of muscle as people often don’t do resistance training into their later years. This is a mistake! Especially for women, who increase their chance of osteoporosis as they lose muscle.

Want to curb your body’s age-related drop in metabolism? Include resistance training in your exercise routine. As you age, keep up the weight training and you’ll keep your metabolism strong and steady throughout all the stages of life. In the event it does drop a little, you’ll be in such good shape you won’t notice.

Myth 5: You Can Eat Your Way to Higher Metabolism

Sometimes you will hear of some sort of “mega-metabolism boosting” trick like eating more peppers or other food or supplement that will boost your metabolism. Usually, metabolism boosting foods only provide that boost for a  short time after you eat them.

In reality, just eating healthier while incorporating the metabolism boosting activities outlined above are the best ways to boost your metabolism.